Years ago, when we lived in the Pilbara Region of Western Australia, we were briefly part of a bushwalking and abseiling business. We’d transferred some of our skills as part of the local SES Vertical Rescue team into a small business venture. At the time, I was an instructor and team leader in vertical rescue, and then gained my commercial and recreational qualifications as well.

One day, when abseiling a couple of people over our variety of cliff faces, the lady took the time to say how relieved she was that we looked like ordinary people. For a moment I was slightly confused, and then as she explained, I began to understand what she meant. At that time, I was in my mid thirties, reasonably fit, but not slim, and my fellow instructor was male and similar in age and shape. What she’d meant, was that we were not twenty, unbelievably buff, athletic, slim and strong looking. Apparently it gave her all the confidence in the world that she’d be able to eventually leap off the ninety metre cliff that we called “Ye Gods,” because we looked so nicely ordinary, that she knew she could do it too.

This week I’ve had plenty of time to reflect on that statement. We’re in Whistler, and yesterday I skied from the top of the Whistler Peak.

This was an unbelievable achievement for me. Seven years ago, I tore my anterior cruciate ligament skiing down Slalom Gully at Mount Hotham in Victoria, Australia. At almost forty-nine, I came to Whistler not expecting to be able to ski at all. I’m not slim. In fact at this time of my life, I’m heavy. I’m not what most people would expect is the optimum shape for any type of athletic activity, despite the fact that I walk hills for exercise regularly, and have been jogging for months,

Seven years ago I was skiing moderately well, but I’ve been too frightened of re-injuring my reconstructed knee to contemplate skiing since then. I have snowboarded during one holiday, but hated getting off lifts on a snowboard, so this time around I decided that I’d see how two days of baby skiing went. (Or maybe one if I crashed and burned.) So, with much knee wobbling terror in my heart, I signed up for ski lessons.

As I was waiting nervously at the beginner (level two Whistler) tent, I happened to stand near a short ski instructor, who was looking for a fourth person to make up her quota of novices. Apparently my previous experience combined with complete paranoia about re-injury, and my demographic, fit the bill, and off I went with Robbie.

The most reassuring thing for me at that first meeting, was how wonderfully ordinary Robbie was. She was not tall, bronzed and bullet proof, but short and sturdily built, with an engaging personality that distracted me beautifully from concentrating on the perceived fragility of my knee. I’m a physiotherapist as well as a writer, and intellectually I know that my right knee is beautifully reconstructed, that I’ve been climbing hills for years and that I have excellent quads and that my proprioception is just fine. Emotionally however, the “injury movie” in my brain had been on repeat since the first sight of the ski lifts.

After the first day with Robbi, Roxana, Juri and Mattai (sorry about the spelling Mattai, I’m guessing!), I was back to skiing turns off the Olympic chair. Yes, I’d fallen, but that was just fine and actually rather reassuring. I felt on top of the world.

The next day, Robbie had a day off, so Juri, Mattai and I ended up with Dave. Dave was not young, and had had surgery himself. Dave has been skiing longer than I’ve been alive. He was also wonderfully normal, and a consummate gentleman. He limped as he walked, and floated as he skied. He happily pointed out to me that I use my right (previously injured) leg much more than I need to. I was obviously trying my best to control everything possible about that knee to the detriment of my skiing technique. By the end of the day, I was using two legs and skiing places I’d never contemplated I might end up. (I’d been imagining trying a day, failing and then hot chocolating and snowshoeing instead).

Then yesterday I was back with Robbie again, along with Juri, Mattai and Chris. (Also an ACL rehabilitee). We skied Upper Whiskey Jack, Ego Bowl, Pig Alley and went up the Emerald Chair a couple of times. Robbie also took us bush bashing and over the edges of stuff (I foolishly confessed to being completely freaked out by edges, so I’m guessing Robbie decided that desensitising me was a necessary evil.) She cleverly didn’t tell me what we were doing, just said “Right on my tail!” and it was only when we were half way through the trees that I panicked and ended up face first in a snowdrift, up to my armpits in snow and one ski buried so enthusiastically that I actually couldn’t move it or reach my bindings. Robbie rescued me, and then we did it again. This time I made it.

Lunch happened. I felt good. And then we went right to the top of Whistler Peak. It was amazingly spectacular, and absolutely and utterly terrifying. I felt as if I were standing on the point of a small rock, precariously balanced, barely daring to breathe. On every horizon was the most beautiful snowscape. Mountains draped in snow, soaring rocks and the pinnacle of an old volcanic eruption standing sentinel above everything else. Just amazing. And then we skied down.

I can’t remember when I’ve been that terrified and that exhilarated all at the same time. Inside my head, a battle went on. Technique warred with terror and distraction every time I looked at the landscape. I crashed a number of times and intermittently had to clench my teeth, attempt to remember to breathe, and “go straight.” If you’ve never “gone straight,” let me explain – it means getting your weight forward and committing to going downhill in a straight line so that you’ll have enough speed to get up the hill or over the flat. I’ve never gone that straight or that fast in my life. At one point a small screech escaped me, and I was definitely hyperventilating, BUT at the same time, I was almost revelling in the speed, feeling my shins on my boots and marvelling at the fact that I was going so fast and was still upright.

By the time we got to the chair, I was exhausted, amazed, astounded and still full of adrenalin. We had one more short run before the chair to the Gondola. I didn’t know whether I could make it. The ski runs at Whistler are long – miles long apparently. I was so tired I was struggling to turn and fell several times at the beginning. Patiently, Robbie talked me through the last few hundred metres of the run onto the last straight bit and then we were down to the chair lift up to the Gondola.

It was amazing. Amazing and fabulous and wonderful, and I’m still feeling the odd shot of adrenalin as I think about it. I’m unbelievably glad that I did it, and that Robbie had enough faith in me to take me up there to see that marvellous view. I’m also extraordinarily grateful that Juri and Chris were so tolerant of my foibles. 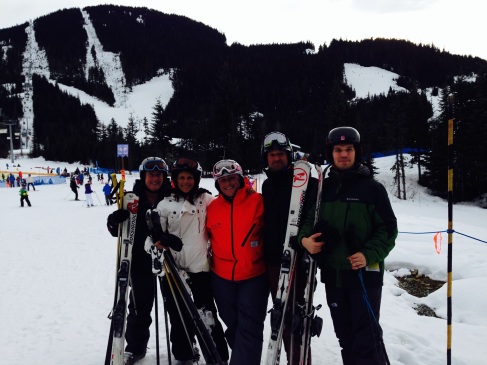 7 thoughts on “How Being Ordinary is Wonderful”