After years living in the PIlbara, we moved to the Hunter Valley. One of the most wonderful things about the Pilbara was the weather. Pilbara weather is dramatic. For much of the year it’s hot, but not ‘just’ hot. If you live on the coast, the heat is like being smothered in a thick, wet, blanket. If you wear glasses like I do, the transition from inside to outside on the coast quite often involves a sudden fogging of the vision as the cool glass lenses and the soggy air combine to mist your glasses.

If you live inland, the hot is dry, baking and oven-like. Walking outside involves a shock of heat that smacks you in the face. I spent one year on the coast, and then moved inland for the next fifteen years. I’m a much bigger fan of dry heat than the soggy variety!

Having said that, despite the heat, the thunderstorms and dust storms are amazing. I remember standing with friends outside the Tom Price SES building (I was a member) watching the lightning approach. The clouds were an amazing navy blue, and the lightning was ricocheting of the clouds in an arc of 180 degrees around us. There was an enormous slam of thunder, and possibly the brightest double fork of lightning I’ve ever seen speared out of the clouds to a hill not far away. We all jumped, and then a friend facing the wrong way said “Wish I’d seen that!” My reply: “Look deeply into my eyes, the image is burned onto my retinas…”

Add to that the cyclone season, when huge spiralling storm systems power towards the coastline, bringing howling winds that can gust up to 300 kilometres per hour and torrential rain. I remember the first time I experienced a cyclone. I was house minding for friends when Cyclone Connie crossed the coast in January 1987 as a category three storm. It was some way to the north of where I was living, but the winds were spectacular, and the rain torrential. I remember looking out of the window (through the cyclone screens) to see hundreds of tiny finches sheltering on the patio, which at that point was in the lee of the house.

When we moved to the Hunter Valley in 2002, we wondered if there would be any ‘decent’ storms here. Fortunately there were. Plenty of thunder and lightning which always makes me feel exhilarated for some reason, and hail, which we hadn’t seen for years. I vividly remember explaining to our Pilbara bred kids that going outside in a hail storm wasn’t the wisest thing to do. Not long after we’d moved into our new house, we experienced an astounding hail storm. The hail came out of the sky in huge chunks, not the pea sized stuff I remembered from my childhood.

Yesterday, to top it all off, we had a sudden storm full of thunder, lightning, horizontal rain and huge gusts of winds. I rather enjoyed it, but our yard wasn’t the one with all the trees down…

And then of course, there were the pets. Anzac (GSD) is a big dog. He’s lovely, except for his small issues with thunderstorms.

And Nosey…who’d have known that the cat has an aversion to thunderstorms too? Or perhaps it was just that one. He spent the whole time crying sadly, refusing to be comforted, insisting on sitting on one particular chair seat under the table. Hopefully he’ll get over it. 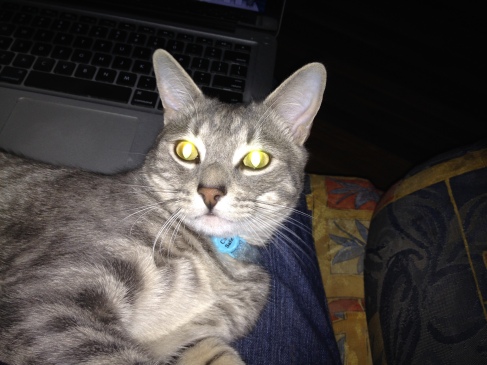